You selected random in the CA sitering. A preview and link to that site are shown below. Alternatively, click here to go to the site ring directory. 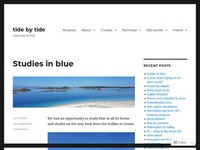 This site is more than just the logs of our cruises: there are posts about a mutiny on the Guardian newspaper's Fastnet yacht entry, a race which split the paper down the middle when I worked there; about how I was held personally responsible (in a manner of speaking) for sinking the Bank of England's yacht; I go deep into the arguments that still rage among both yachtsmen and classicists about where Odysseus actually sailed. I report on building a lapstrake pram dinghy, about nerdish technical issues that I’m interested in, such as Brexit and VAT, electronic navigation and chart accuracy, and I write posts about barge cruises and about trans-Adriatic races with a friend who belongs to a Venetian yacht club. We’ve sailed to Scotland and Ireland in two extended round Britain cruises, been many times to France and Holland, spent three years recently on the Biscay coast and chartered often in the Mediterranean, the Adriatic and as far as the Seychelles as well as sailing a friend's local boat in the Californian Channel Islands. There are lots more places we plan to go. I also indulge myself here with reminiscences of sailing from the fifties onwards, as much for the grandchildrens' benefit as my own.