This is a news item

There are continuous broadcasts in French on Ch 63 for these areas. For those whose French is limited this is a good opportunity to get used to the terminology and the names of places that are referred to.

For French weather terms, see http://weather.mailasail.com/Franks-Weather/French-Marine-Weather-Terms .  Any additions or corrections will be welcome.

2010 was the year that proved that East C

In Carlisle Bay, Barbados several of the boats at anchor belonged to CA members who had independently crossed the Atlantic in December 2009 and stopped in Barbados to visit the island and break their voyage before going on to the main Caribbean island chain.

In recent months, there has been some criticism of Met Office Inshore Forecasts for UK waters. In a letter published in the April PBO, the MCA has given some figures for “accuracy” of forecasts. They state that over a period of one  year,

Leaving aside any remark about lies, damned lies etc, what do these figures mean?

Around the west of Scotland Portpatrick reception can be difficult to impossible because of topography. On 518 kHz, Malin Head broadcasts Sea Area forecastss for Shannon, Rockall, Malin and Bailey (as well as Irish Coastal  and some High Seas Areas).

It is the season to be out there cruising, sailors are dropping anchor and looking through the binoculars’ at the cross trees of the others in the bay. The CA burgee is a magnet and much convivial planning has been achieved, a ‘Blue Water’ Section has now being launched. 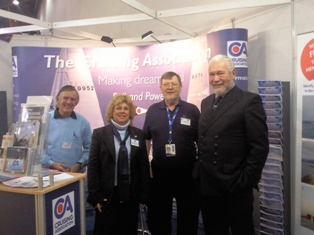 The Cruising Association enjoyed a very successful London Boat Show this year. We were delighted to welcome almost 400 of our members to our stand, and we now have more than sixty new members who signed up at the show. Our Patron, Sir Robin Knox-Johnston, visited the stand midway through the week and is pictured here with General Secretary Wendy Hodkinson and watch keepers Brian Hammett and David Beane. Thank you to all of our watch keepers for their time and enthusiasm.