A major revamp of the South West Section is being launched today, Tuesday March 6th, with an enlarged coverage area, the introduction of the SWNet forum and the release of the first of a series of South West podcasts. One of the most important innovations is the introduction of SWNet, a forum aimed specifically at those who sail the waters of the south west. There is a huge amount of knowledge and experience held by members of the SW Section and SWNet puts members in touch with one another so that information can be shared. It is expected that SWNet will become the main channel of communication in the section.

Another innovation is the release of a podcast which covers Dartmouth and the River Dart. It is the first in a growing series on the ports, harbours, rivers and anchorages of the south west. A podcast on Padstow will be released shortly and one on Plymouth is in production. The podcasts feature CA members, HLRs, port and harbour authorities and provide a practical guide to the areas covered. The podcasts can be heard online or downloaded making them ideal for cruise planning and use afloat.

Members can find the first, and future podcasts, on the members' South West Section page.

Non-members can find the first podcast on this South West Section page.

To mark the 50th anniversary of The Sunday Times Golden Globe Race, which was won by CA Patron Sir Robin Knox-Johnston, the SW Section is holding a major rally in Plymouth Yacht Haven from 8th. to 10th. June and Sir Robin is expected to be guest of honour at the rally dinner. 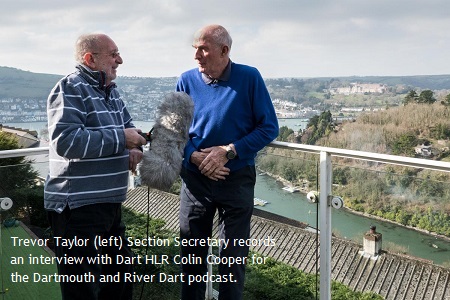 Following the launch of the new-look SW Section, Secretary Trevor Taylor said "It is an exciting time with lots going on. The increase in the coverage area means we now better reflect the areas sailed by those who keep their boats in the south west and also those who visit these waters. The introduction of SWNet is really important as it puts all our members in touch with one another. This means that if a member wants advice on anything from finding a reliable engineer to recommendations of a quiet anchorage all that needs to be done is post a message on SWNet and wait as the answers roll in. A further innovation is the release of podcasts – it’s like having a local on board talking you through everything from approach pilotage to pointing out the best pubs. The podcasts will grow into a valuable library – guides to the ports, harbours, rivers and anchorages of the south west."

John Orr, the SW committee member who is organizing the Plymouth rally, says "We plan to start with a pontoon party on the Friday evening and then on Saturday catch the ferry to the National Marine Aquarium returning in time for the rally dinner on Saturday evening with Sir Robin as guest of honour. On Sunday there’s a beach BBQ. It’ll be a popular fun-filled weekend and we are already getting enquiries from those wishing to attend."