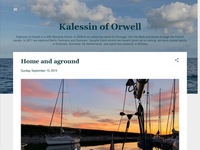 Kalessin of Orwell is a 33ft Westerly Storm sailed by Sam and Camilla and their two sons, Guy and Ben. In 2006-8 we sailed her down to Portugal, into the Med, and home through the French canals. In 2011 we explored Baltic Germany and Denmark. Despite Sam's stroke we haven't given up on sailing: we cruised gently in Denmark and Germany in summer 2013, and Kalessin is now cruising in home waters on the UK East Coast, Belgium, and the Netherlands.