Cantilena of London sails Chesapeake Bay and the ‘Down East Loop'

We all have a dream and CA members Des and Terry Crampton departed Ramsgate in May 2018 and shipped their Najad 380 Cantilena of London from Southampton to Baltimore MD, USA.

Following exploration of Chesapeake Bay, they entered the Atlantic by transiting the C&D Canal and the Delaware River before sailing north along the New Jersey coast to New York City. Here they commenced the ‘Down East Loop’ which involves navigation into the upper reaches of the Hudson River and a lock-assisted climb over to the St Lawrence River. The circuit is completed by a south-westward cruise of the Atlantic coasts of Nova Scotia and New England.

Des and Terry took the opportunity to extend the Loop with an eastward passage of the Erie Canal, entering southern Lake Ontario at Oswego. Cantilena was winterised and stored at Sodus Point NY, and in early summer 2019 they began a clockwise circuit of Lake Ontario which included visits to Toronto, Bay of Quinte, Kingston, and the Thousand Islands. Having made the downward passage of the giant Seaway locks, they visited Montreal and Quebec City, sailed outwards around the Gaspe Peninsula, and returned to the Atlantic via the Northumberland and Canso Straights. Cantilena was winterised a second time and stored ashore in the beautiful Bras d’Or Lakes of Cape Breton Island in Nova Scotia. Covid-19 restrictions intervened in 2020 leaving Cantilena high and dry in Nova Scotia for her second winter.

Place: Your own home or boat (Zoom meeting)

Booking: There's no need to book, simply join the meeting here via Zoom a few minutes before the start time.

For those unfamiliar with Zoom please don't be put off by attending a meeting this way, it is a great way to keep connected in these difficult times. If possible you will need to download the free Zoom app to your device. It can be used on computer, tablet/iPad or phone. The link will take you to a waiting room, it will also ask you to connect with audio and video click 'connect' to both. At 7.00pm the host, Juliet Wallace, will then let you into the meeting and you will see others there. In the top right corner you will see a little square of dots and this helps you choose how you wish to see the meeting. Speaker view, just the person that is talking or gallery view which is all the participants including the host.

During the presentation we will remain on "mute" and then at the end there will be an opportunity to ask questions. 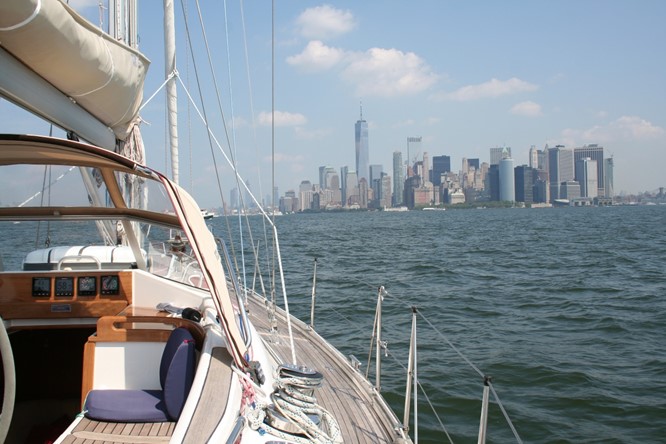 Cantilena on the approach to New York City