Entering & Leaving France for Cruisers – An update from The Cruising Association

An Update from The Cruising Association – published Wednesday 18 May 2022

Further to the update below released by the Cruising Association on Monday 16 May 2022 and demonstrating the dynamic nature of the process for Entering and Leaving France, the Cruising Association has received further information that two additional French channel ports - Saint Cast and Saint Quay - have now been given special dispensation for a limited period to permit arrivals and departures without passports being stamped.

From 1 June 2022 to 30 September 2022 visitors arriving to the ports of Saint Cast and Saint Quay by sea from outside the EU may submit a ‘Preavis Immigration’/Notice of Arrival form to avoid the need for passports to be stamped. The form must be submitted at least 24 hours in advance of arrival or for shorter passages before departure from the previous port. The same process applies to departure.

A copy of the ‘Preavis Immigration’/Notice of Arrival form must be kept on board at all times. This dispensation applies uniquely to Saint Cast and Saint Quay, which are both on the north Brittany coast.

An Update from The Cruising Association – published Monday 16 May 2022

With the 2022 cruising season upon us and the pandemic restrictions eased for travel, the appeal of crossing the channel to France is attractive for many UK based sail and motor cruisers. France has always welcomed foreign sailors, although Britain leaving the EU introduced a more formal process to arrival and departure requirements.

We are pleased to share an update on the changes since early 2021, the current arrival and departure process, and expectations for the future. 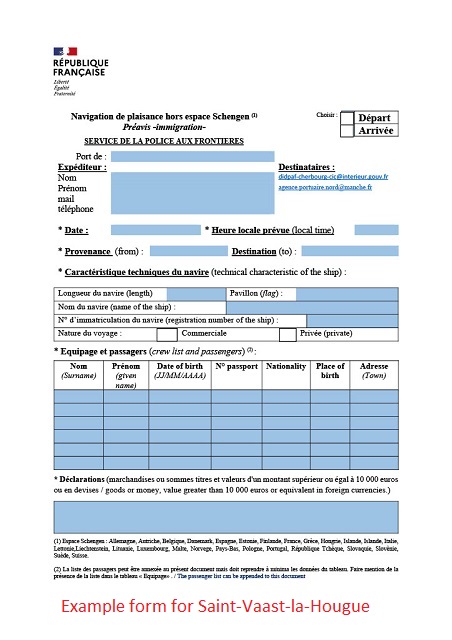 After the end of the Brexit transition period on 31 December 2020, the process for a boat with non-EU citizens arriving from outside of the EU to France was that arrival would need to be at a ‘Port of Entry’, so that French Border Police and/or French Customs could formally check in the boat and crew. French authorities hoped to simplify this by allowing an intended passage to be notified by emailing a ‘Preavis Immigration/Notice of Immigration’ form in advance. This would allow arrival at any port and not require a designated port. Officials could then decide how best to process this information, often by meeting the boat shortly after arrival. These forms started to appear on the websites for some ports, but not all. It then became apparent that the practicalities for French officials to go from port to port to check boat papers and stamp passports could be onerous, and so the number of ports included in the Port of Entry scheme was limited.

The outcome is that the entire process for checking into and out of France for leisure cruisers remains, as the Cruising Association understands it, under review as Brexit has highlighted a number of issues. These include a lack of Ports of Entry and a shortage of officials in the Ports of Entry to cope with the numbers of potential visiting yachtsmen, especially now the pandemic is no longer restricting cruising.

However, with the imminent introduction of the new European EES (Entry/Exit System) and ETIAS (European Travel Information and Authorisation System) which come into effect towards the end of 2022 and early 2023 respectively, it seems unlikely there will be further changes of any significance until that time.

We have kept its members up to date on the arrival to and departure from France protocols, based on information from French authorities, feedback from our local representatives and from our members who have shared first-hand experiences of the processes. We are also pleased to publicly share an overview of these currently effective updates with the broader cruising community.

Those intending to cross the channel from the UK to France should first identify their favoured port for arrival. If this is not a Port of Entry, then check information from the port (or CA members can check on the CA website) whether there are special arrangements for arrival with local Border Police (Police Aux Frontières - PAF) or Customs (Douane). This will usually be a link from the port’s website to a form usually named ‘Preavis Immigration’. If such a form is available, then complete and email it in advance of the passage (24 hours or 48 hours if a weekend). On arrival, if you have not previously received a reply to your email, call the named local Port of Entry Border Police/Customs to ask for advice. They may then visit you onboard. 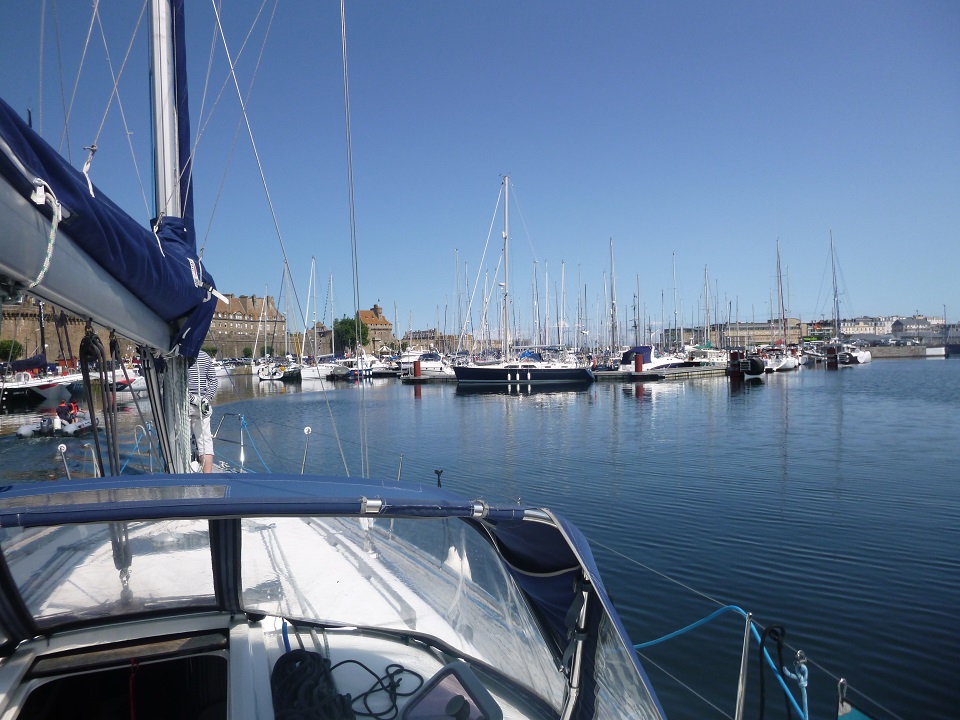 If your chosen port does not have such a ‘Preavis Immigration’ form, then you will need to select another arrival port which either has such a form or is an actual Port of Entry. Even with a Port of Entry it may speed up the process if you complete and email their form in advance; also keeping an electronic copy of the form, a note of when it was sent, and if possible a print-out. Be aware that many offices (PAF or Douane) are not close to the marinas. Also, many of these offices are not open 24 hours, or even office hours as officials may also be checking commercial arrivals from ferries or even local airports. The skipper and all crew will need to see the officials so that identity can be verified, and passports stamped. Boat papers may also be required to be presented.

In extreme situations such as stress of weather or other force majeure, these requirements may be overridden and any port entered with permission from the harbourmaster.

Passport stamping on departure from France

The same process should be followed for departure. It is even more important that passports are stamped on departure, to avoid a situation where you might appear to be overstaying in the Schengen zone with the risk of future entry being denied. As offices may not be open when you wish to depart, it is wise to plan around this or possibly officials will stamp you out in advance.

"This may seem onerous, but it is a legal requirement and those of us who have sailed beyond Europe will be aware of these processes in other countries," commented Bob Garrett, CA Channel Section Secretary and Chair of Council.

"Other non-EU sailors visiting the EU have always had such processes for sailing to France, without the advantage of some of the flexibility now being offered. All reports the Cruising Association has received from its members of interaction with French Officials have been good – friendly, helpful and accommodating. They want visitors for the friendship, the camaraderie and the tourist business, so they are making it as easy as possible within the legal framework and resources available. France is a great place to cruise so let’s not be deterred."

The Regulations and Technical Services group (RATS) is an executive committee of the Cruising Association (CA) made up of CA volunteers. RATS gives advice and assistance to CA members and others on a voluntary basis but this is subject to the following Disclaimer and should not be regarded as a substitute for appropriate professional advice.

Any advice has been prepared by the Cruising Association, its members and others and they and it have tried to ensure that the contents are accurate. However, the Cruising Association, its employees, contributors and relevant members shall not be liable for any loss, damage or inconvenience of any kind howsoever arising in connection with the use of such advice, save to the extent required by applicable law.