Sir Robin Knox-Johnston, the first sailor to complete a solo non-stop circumnavigation in 1969 aboard his 32ft yacht Suhaili, is Patron of the Cruising Association (CA), the UK’s leading organisation for cruising sailors with over 6,000 members around the world.

In a fitting curtain-raiser to the main event and in celebration of the recent re-launch of the CA’s South-West Section, there is a Golden Globe Rally taking place in Plymouth from 8-10th June. Organisers have scheduled in a welcoming Pontoon Party for around 30 participants at Plymouth Yacht Haven on Friday 8th June and a ticketed BBQ at the Mount Batten Centre which the guest of honour, Sir Robin Knox-Johnston, will attend on the Saturday night, 9th June. 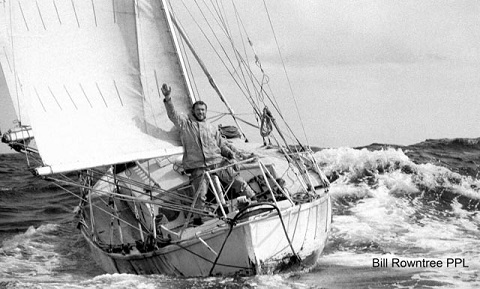 In addition, and in preparation for the start of the Golden Globe Race, Sir Robin will be sailing his boat Suhaili in company with the entrants to the Golden Globe Race from Falmouth to Les Sable d’Olonne for the start on July 1st. He is predicting his arrival in Les Sables to fall between June 17th - 20th and has suggested that a small number of Cruising Association boats should join him, providing a friendly Armada as Suhaili sails into Les Sables.

A suitable rallying point is under discussion for the CA boats for the final passage into Les Sables. Pierre Lambot, the CA’s Honorary Local Representative in Les Sables d’Olonne has been the CA’s liaison with the marina and, through his efforts, the CA has now received confirmation from the Mayor of Les Sables d’Olonne that the ten or so CA boats escorting Suhaili to Les Sables are welcome. It is anticipated that the majority of the CA boats will be members of the CA’s Biscay Section and therefore their boats will already be in French waters.

As the CA’s President Judith Grimwade points out: "We are extremely proud to have Sir Robin as our Patron and this really is a golden opportunity for the CA and its members to be involved in a very special and historic occasion. We anticipate getting a good turn-out!"