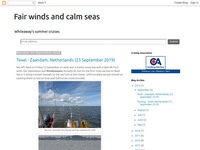 The summer cruises of Whileaway a Westerly Oceanquest sailed by Andrea and Richard.