The CA and Groupo Trabajo Orca Atlantica (GTOA - Atlantic Orca Working Group) have partnered to launch a new online reporting platform for sail and motor vessels to register orca interactions and sightings along the Iberian Peninsula, in order to better understand the orca’s behaviour and identify ways to help skippers avoid interactions and reduce damage to their vessels.

The new phenomenon of orcas interacting with and often damaging small yachts and other vessels along the south and west coasts of Spain and Portugal commenced in 2020 and gathered pace in 2021. The behaviour is displayed over a period of several months (peaking between May to October) by a population of orcas that feeds on and follows the migration of tuna exiting the Mediterranean from the Strait of Gibraltar and heading west and north around the Iberian Peninsula. The orcas have been reported to touch, push and even pivot boats, which in some cases resulted in damage at the stern, mainly on the rudders.

Interactions have been reported to last for periods of up to two hours and current safety advice includes depowering and stopping the vessel, leaving the wheel/tiller free to turn and keeping a low profile on deck to make the interaction less interesting to the orcas.

A group of Spanish and Portuguese marine scientists formed Grupo Trabajo Orca Atlantica (GTOA - Atlantic Orca Working Group) to study the orcas’ new behaviour. GTOA has identified many hypotheses on the reasons behind the behaviour, but do not know exactly why orcas are interacting with vessels.

CA and GTOA partnership will establish a knowledge base

To assist in providing support to the boating community, the Cruising Association and its Regulations and Technical Services group (RATS) has formed a collaboration with GTOA to enable better understanding of the orcas’ behaviour. This will allow both organisations to leverage knowledge and examine what factors may increase or decrease the chances of an interaction, identify the skipper actions and mitigation measures which do and don’t work, and in turn improve the currently available information resources and advice.

The Cruising Association has launched an online reporting form in English, French, Portuguese and Spanish - www.theca.org.uk/orcas - with multiple fields to identify the circumstances and environment when an orca interaction does or does not occur.

"We hope that the reports received will identify patterns that will help us address solutions," commented Derek Lumb, Cruising Association President. "Whilst supporting sail and motor cruisers is integral to the remit of the Cruising Association, we are equally pleased to play our part in extending the gathering and sharing of information beyond our direct membership to support the entire boating community."

Alfredo Lopez, representative of GTOA, added, "The GTOA is pleased to expand our relationship with the CA into such a positive and active partnership, which will support the boating community and align with GTOA’s mission to protect this subpopulation of orcas which are catalogued as vulnerable. We hope to strengthen the ties between the scientific community and the maritime sector, increase knowledge, transfer scientific information, avoid risks as well as contribute to the conservation of species and the marine environment."

How the cruising community can help

For the project to succeed, the Cruising Association would like to receive reports on both an ‘interaction’ and an ‘uneventful passage’:

Interaction - skippers who pass the Iberian Peninsula and have an orca ‘interaction’ (direct contact with the boat) at any time of the year are invited to complete the online reporting form at: www.theca.org.uk/orcas/interaction-report-form

Uneventful passage - to create a meaningful comparison, skippers who pass through the Iberian Peninsula and have an ‘uneventful passage’, but only during peak periods in the locations listed below, are invited to complete the online reporting form at: www.theca.org.uk/orcas/uneventful-passage-report-form

Whilst the Cruising Association is a member organisation, updated information on orca interactions and the invitation to complete the ‘interaction’ and ‘uneventful passage’ reporting forms are open to the entire boating community at www.theca.org.uk/orcas. 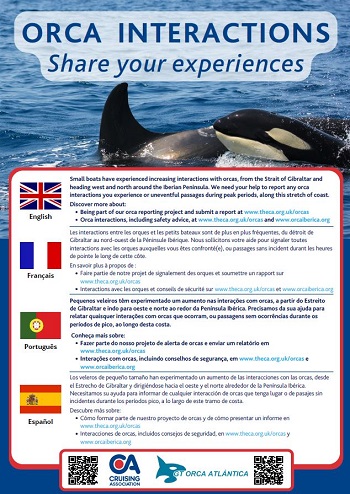 Click/tap the image to download the orca interactions poster

About the Cruising Association (CA)

Founded in 1908 specifically to meet the needs of cruising sailors, the Cruising Association has been a home to many of the great names in sailing. It is a non-profit mutually supportive association and is acknowledged as the leading organisation for sail and motor cruisers, with over 6,400 members around the world.

Well-known names associated with the CA include HRH The Princess Royal and the CA's Patron, Sir Robin Knox-Johnston. Supporters also include Tom Cunliffe, Mike Golding, Jeanne Socrates and Don Street, amongst others.

A group of Spanish and Portuguese marine scientists formed the GTOA to study the new behaviour. GTOA is actively looking at the conservation and management of an endangered subpopulation of killer whales in the Iberian Peninsula.

The GTOA website - www.orcaiberica.org - provides details of the location of interactions on a month-by-month basis and gives advice on how to respond in the event of an interaction.