Latest updates from March 2018 can be found here.

On January 22, the Director of the Croatian Tourist Board, Kristjan Staničić, met journalists at the Düsseldorf Boat Show who questioned him about the tax. He said that boat owners would be able to pay the 2018 tax at the 2017 rate throughout the year, which is what the CA has been campaigning for, and can mean a saving of up to £1,000.

He also said that marinas would be able to stamp the tax receipt to show the period of time that owners spent on their boats so that, for example, anyone who spent two weeks on their boat but paid the tax for 30 days could use the extra time at a later date. However, neither the marinas nor the port offices contacted by the CA are currently aware of this, and it has not been possible to confirm the announcement with any government department.

There are concerns that what is being described as a tourist tax is, in fact a boat tax to be paid regardless of how many people are on board. It is also clear that foreign boat owners would be treated differently from Croatian nationals and both of these situations could be unlawful within the EU.

The most widely read nautical magazine in Croatia, More, plans to publish several pages condemning the move in its next edition. Stuart Bradley met the magazine’s editor during the Düsseldorf boat show and is also meeting the Austrian safety organisation, Sea Help, which has ten bases in Croatia, to discuss special offers for CA members.

The CA is in regular contact with other organisations that are opposing the tax increases on behalf of boat owners and had meetings with several during the recent Düsseldorf Boat Show. Within Croatia, the campaign has been led by the Marinas Association through the Chamber of Commerce, and the principal boating magazine More has published several articles condemning the tax. Its Editor, Braslav Karlić, is determined to do more. Sea Help, the Austrian rescue organisation which has ten bases in Croatia, organised a petition against the tax and has been lobbying government ministers. The CEO, Wolfgang Dauser, knows the main protagonists in the Croatian government personally. The boating publication with the widest circulation in Europe is the German-based magazine ‘Yacht’ and its Cruising Editor, Andreas Fritsch, has also been active in publishing articles and writing to ministers. ADAC, the German-based tourist organisation, which has more than 18 million members, had a large stand at the show and its Maritime Affairs Manager, Dr. Steffen Häbich, was keen to meet and discuss what more could be done.

It was never expected that the Croatian government would admit that it had made a mistake and amend the tax immediately, but it is known that the Ministry of Maritime Affairs has voiced opposition to the tax. The continuation of the 2017 rates of tax through 2018 would allow time for a review and a fairer outcome from 2019 onwards.

Increases in tourist tax for foreign boat owners in Croatia has led to an international protest involving sailors from Austria, Germany, Italy, and the UK.

The new tax, which equates to a 400% increase for cruising sailors, has now become law but meetings are continuing because boat owners feel strongly that they are being unjustly treated. A holiday home owner in Croatia will pay £14 tourist tax a year for two people while the owner of a typical 12–15 metre yacht will pay over £900 for the same benefit.

Cruising Association representatives met the Croatian Ambassador to the UK, Igor Pokaz, and the Counsellor for Economic affairs, Davorka Žanić-Dražić, last month. They emphasised the unfairness of the new tax rates and that they had received considerable support from the nautical tourist industry in Croatia. Past President of the CA, Stuart Bradley, pointed out: “While it is the Croatian government’s right to set whatever tourist tax it chooses, the increases would be bound to have a negative effect on the nautical tourist economy.’

The most widely read nautical magazine in Croatia, More, plans to publish several pages condemning the move in its next edition. Mr Bradley, will also be having a meeting with the Editor during the Düsseldorf boat show and is also meeting with representatives from the Austrian safety organisation, Sea Help, which has ten bases in Croatia to see what special offers they are prepared to make to CA members.

In October, President of the Marinas Association at the Croatian Chamber of Commerce, Sean Lisjak, ‘If something does not change, one can expect a dramatic drop in the nautical traffic in the Adriatic.’

Ian Wilson, representing the CA’s Regulations and Technical Services Committee, explained that he had spent two years based in Croatia but, following the August announcement, had recently moved his boat out of the country.

Last year the CA advised people to pay the tourist tax for 2018 in advance at the 2017 rate and many have saved up to £1,000. In response to the backlash, the Croatian Minister of Tourism, Gari Cappelli, said: “Due to the constantly changing trends in tourism and a need to improve the tourism sector, the Ministry of Tourism has started developing a new Sojourn Tax regulation that will be prepared in cooperation with all stakeholders in the tourism sector”. 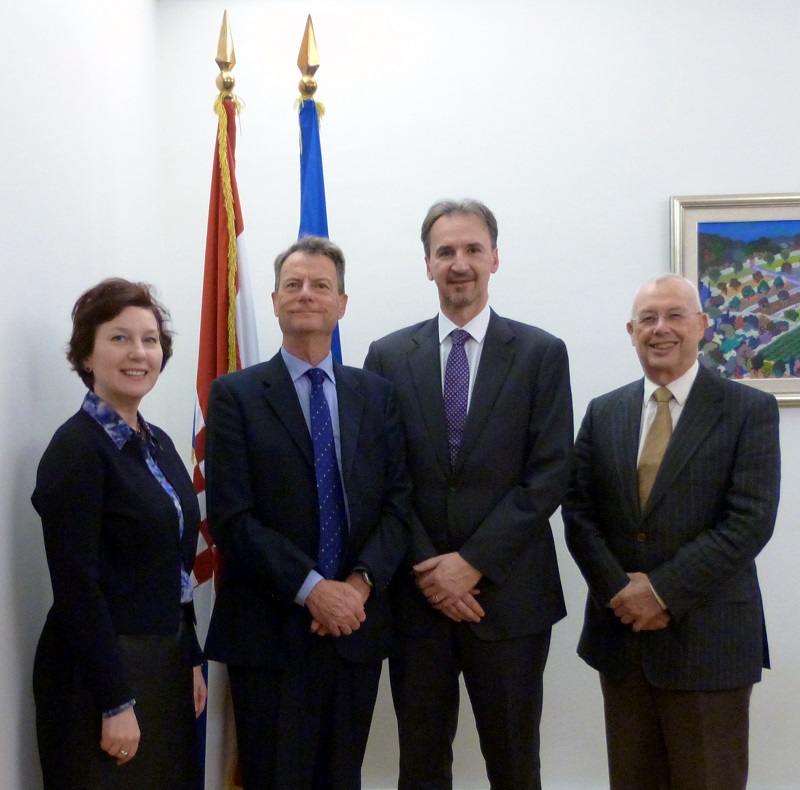 Pictured left to right: Counsellor for Economic affairs, Davorka Žanić-Dražić; Ian Wilson (CA's Regulations and Technical Services Committee); Ambassador Igor Pokaz; and CA Past President Stuart Bradley, who met to discuss the sojourn tax in London. Ian said that after two years based in Croatia he had recently moved his boat out of the country, and others would follow.